Read more in this CapeCodToday.com article. 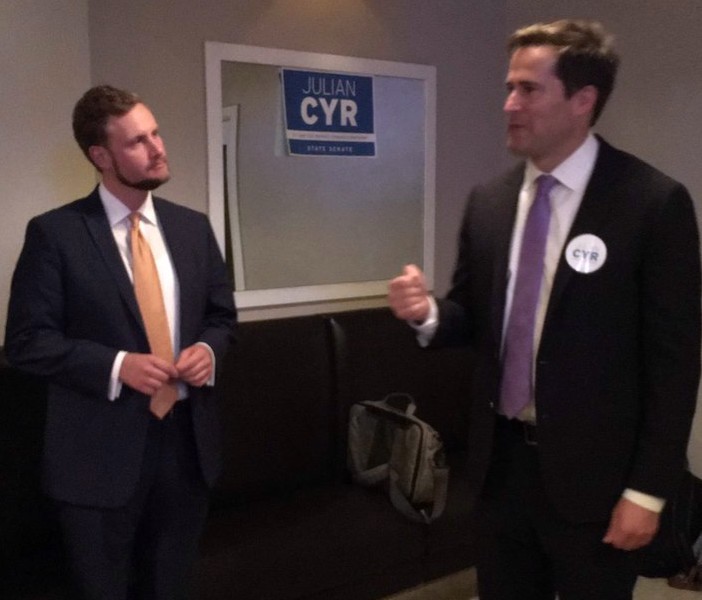 “Julian is an outstanding candidate for office and will represent Cape Cod, Martha’s Vineyard and Nantucket with distinction and expertise in the State Senate,” said Congressman Moulton. “Julian has made his campaign about issues and ideas for the future of the Cape and Islands. Julian will lead for veterans and all people as your State Senator.”

“As a former Army Sergeant, I served my country in both Iraq and Afghanistan.  Coming home from war can be difficult, but it’s even more difficult when you come home to a broken community. I work as an EMT at Cape Cod Hospital and I’ve seen far too many people die from opioid addiction.  To tackle this epidemic, we need Julian Cyr in the State Senate. Julian is the only candidate who has the public health experience to fight for those plagued by addiction.”

“As a retired Vietnam veteran and a retired Navy commander of 20 years, I have long recognized and encouraged bold leadership and strong decision-making. As our next senator the Cape needs and deserves a man of character, conscience and discerning intelligence similar to state Sen. Dan Wolf.

Julian Cyr has the competence to focus on our current opioid crisis. He has exhibited expertise in the area of health care legislation, having worked as deputy director for government affairs at the state Department of Public Health. In that position, he has a proven ability to work with both parties in the Statehouse. He promotes a collaborative approach to solving the problems on the Cape such as the wastewater issue, housing, employment and the needs of the elderly, veterans and the homeless. And he has the knowledge and desire to promote the safety and security of our people and environment by calling for the immediate closure of the Pilgrim Nuclear Power Station. Julian Cyr, a native Cape Codder, is the man for today’s problems, the collaborator for tomorrow’s solutions and the voice of the future.”

“Julian Cyr, with his training in community health, understands the importance of maintaining veterans services for our homeless and transportation challenged veterans. He will fight with Congressman Bill Keating to ensure that the Hyannis Veteran's Service Center has the resources to provide for the critical health and mental health challenges.

Post-traumatic stress disorder is an issue that affects veterans from Korea to Afghanistan and is the leading cause of veteran suicide. It is a syndrome that leads to veteran involvement in the criminal justice system with horrendous results. Julian will continue in the steps of Dan Wolf in advocating for a Veterans Court system similar to that which exists in other states. Dan is the only state legislator that I've known to visit Veterans in jail to find out how the court system has failed them. I know Julian will continue in this advocacy.”

“With his support of social justice for all individuals, I know Julian Cyr will fight for social justice for women veterans in their treatment as victims of sexual violence and abuse in the services. He will work with the various veterans service organizations and work with state and federal organizations and officials to ensure the adequacy of services for women veterans.”